An unofficial tourism site aimed towards English speaking visitors to Japan and Ishikawa.

There’s a lot of sites out there for tourism to Japan, especially in the case of Ishikawa. But, most English tourism sites for Ishikawa are visually unappealing and feature limited, out-dated, information. Many tourism websites focus way too much on the history and explaining it than actually giving visitors the information they would really want: Where to stay, where to eat, and where to go. 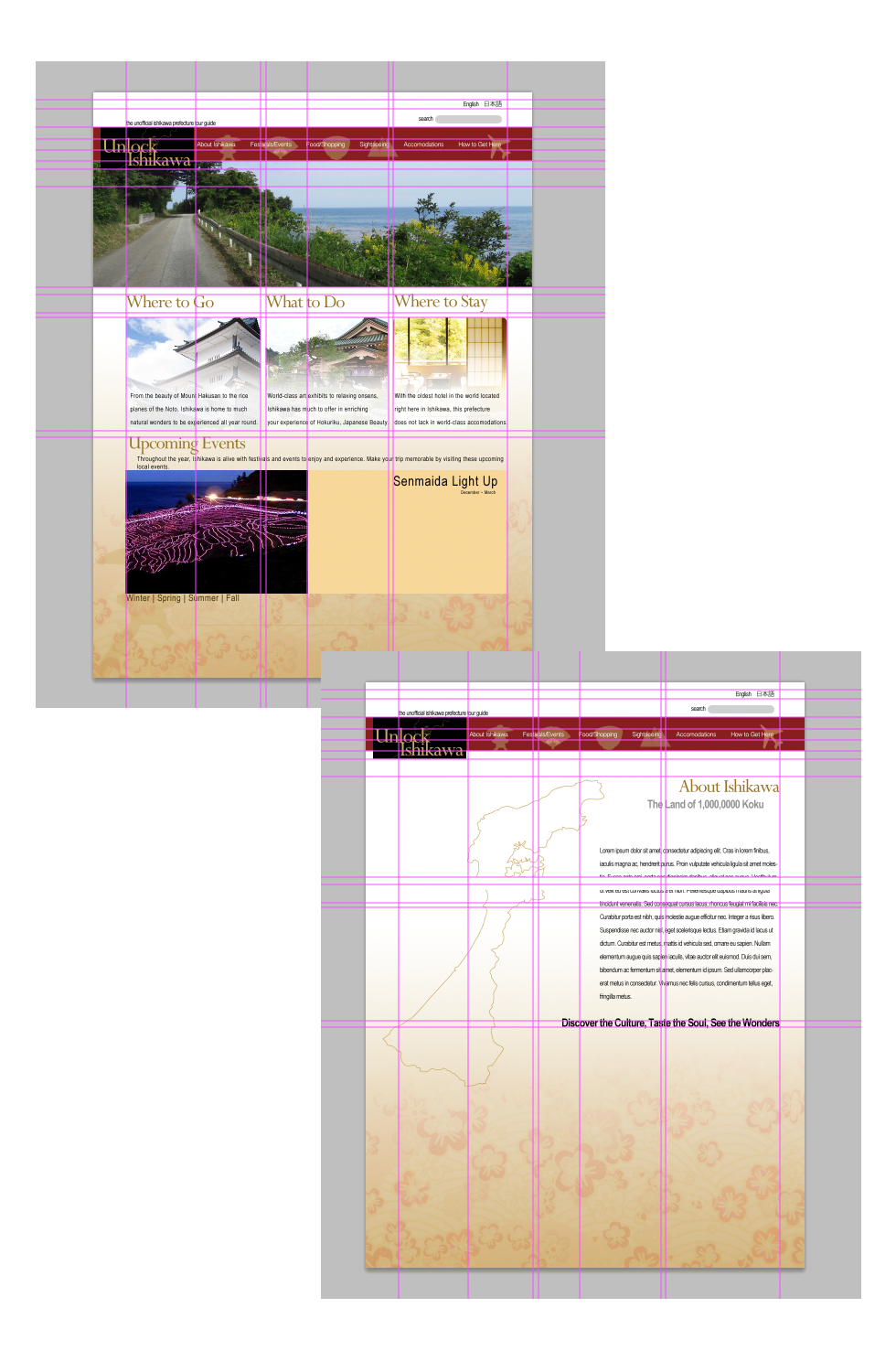 I skipped wireframing and went straight into a mockup design in Photoshop to give a visual feel of direction for the website. Ishikawa is known for a strong history of lacquerware, gold in art, and samurai past. Taking those three elements, I decided that a website that would emulate feel and flow of artwork that is local to region. The mockup design took roughly a few hours, give or take. The main focus was to put the three “themes” (food, sleep, go) on spotlight.

Colors again were based upon Ishikawa’s history. Black for lacquerware, Gold for the artwork, and red to represent the rich quality of Kanazawa. Also, black/gold/red compliment each other very well, me thinks.

Overall, after the mockup design was completed it was to actually coding and putting the site together. WordPress was the CMS and a theme needed to be made. The site uses customized pages as portals to the information that users need to obtain. 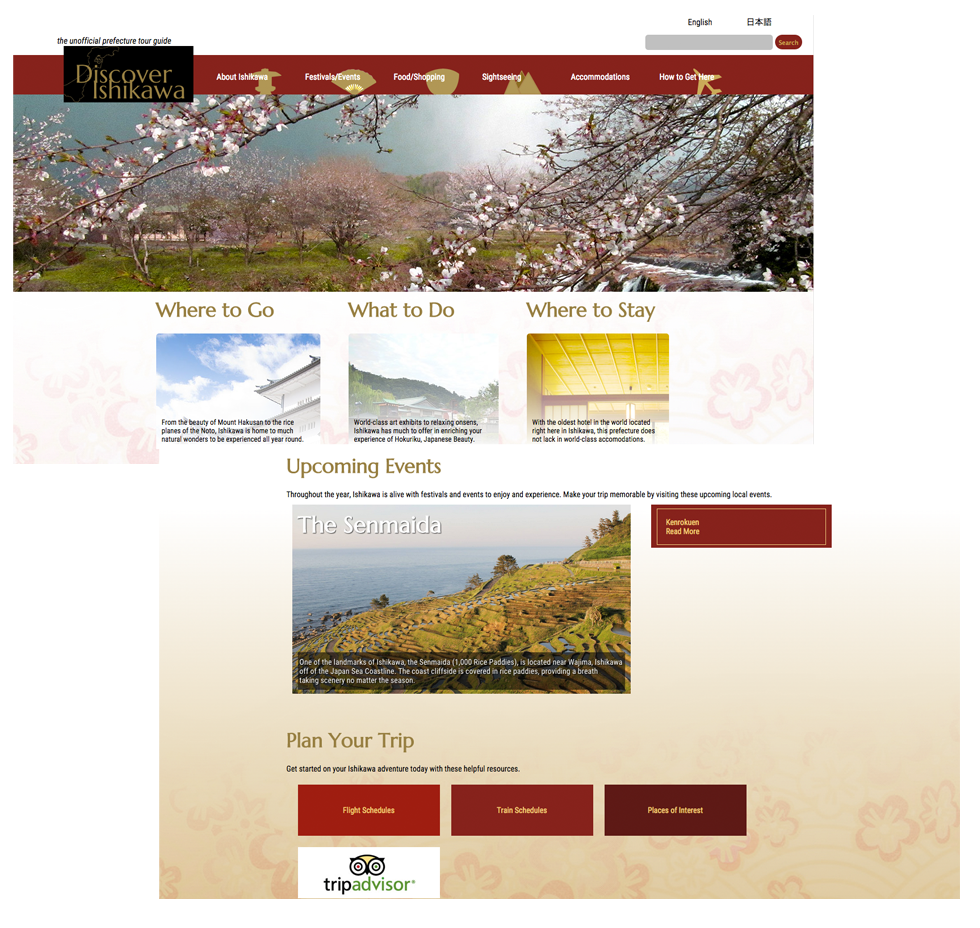 The biggest focal point was on the graphics and images of Ishikawa itself. Everything was created in Illustrator, from the sprites in the navigation to the image of Ishikawa used in the about page. Because the sprites would be used often, they needed to be flexible. The map of Ishikawa, especially, needed to be a vector due to the multiple times the image would be used in the site (header logo, about page, etc). Parts of Ishikawa were then split up into “regions” would then act as visual markers on each region’s page. 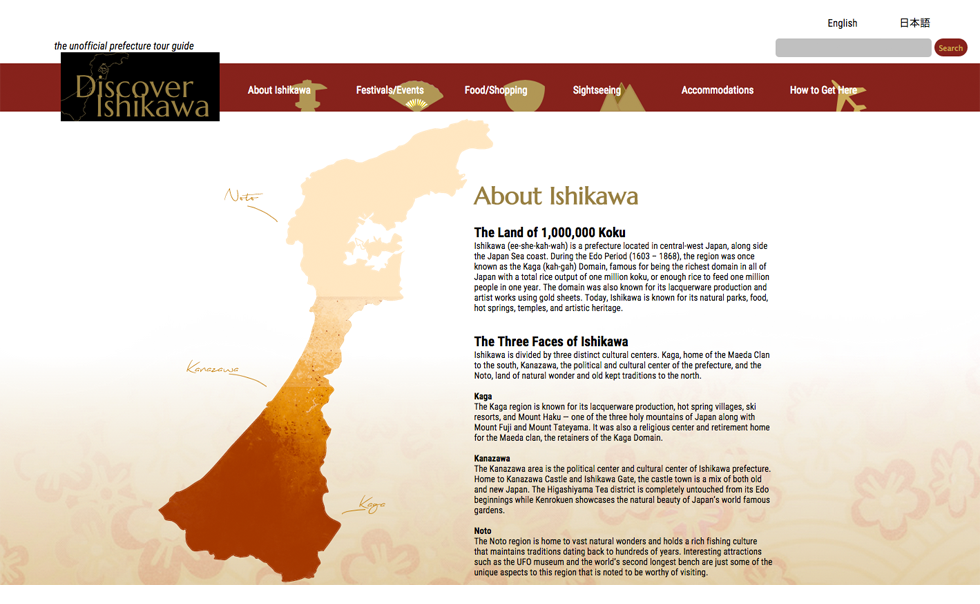